Did you understand the above? Binary, ones and zeroes, the language of computers. Binary is perfectly logical and yet very few can read it. For this reason a computer translates it into letters, numbers and punctuation for our convenience.

This is what it says:  “Developers are the clever people who write the computer code required to produce an application.”

A developer is a human being just like you and me, and so it is not unreasonable to assume that the developer can translate the Developer Language into something the end user of the application is going to understand.  What the end user understands is the User Language.

This can work, but it is not the speciality of the developer. In general, and even with the best intentions, developers speak a broken form of User Language using best guesses and logical assumptions. They specialise in the logical thinking of computers. Users, although logical and often clever people, do not speak the Developer Language and developers are not fluent in the User Language. This can and often does lead the experience of the end user to be jarring, awkward and sometimes even painful. To put it simply, the user experience suffers due to poor communication.

The User Language in this case is meant to convey the purpose, functions and journeys of the application. As you can imagine, it is very important to get this right. The application was after all produced for use by an end user. For this reason specialists are used to translate the application into the User Language. These specialists are the designers. The designer’s job is to be fluent in the User Language. The reason we need specialists is because unlike the Development Language which changes little, the User Language is a strange and wonderful thing, not just made up of words, but also colour, emotion, expectation, sounds, animation, sensation, consideration, time, space and more. It is a living, evolving language influenced by trends, culture, technology, demographics and endless other factors.

Popular posts from this blog 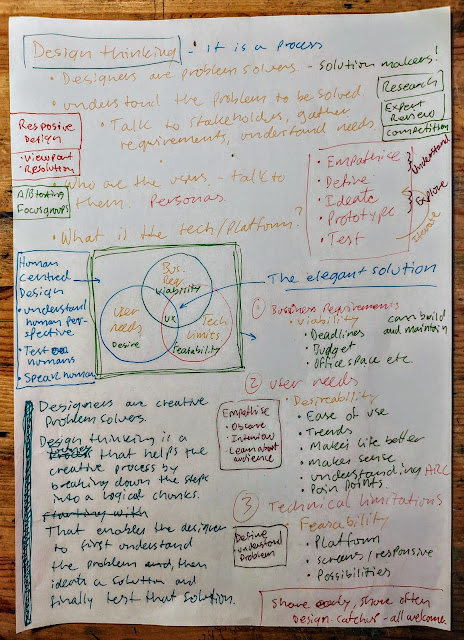 A note I made for a talk I did on Design Thinking. I hope you can read my handwriting.
Read more

October 04, 2021
As a UX product designer, the Project Brief is the first major document I need to have for building a product. If there is not one already, I create one or add to one. The following are the key questions that the brief needs to answer. I don’t always use every question, but I try to fill in as much as possible. It becomes the foundation of the project and becomes the source of truth. For this reason it must be updated should truths be changed or discovered. It is shared and open to all members of the project. Project Name Project title, code name and AKAs. Dates & Milestones         Start date. Launch date. Major deadlines and targets if any. Other critical project dates. Description An overall description of the product. What problems are we solving and why? What is the goal? Key Team Members Stakeholders and project owners. Who signs off? Product Owner, Project Manager, BA, Designers, Developers, QA, others. Target Audience Who are the users? What types are there? What is the s
Read more

September 30, 2021
I have been managing staff now on and off for nearly twenty years. Although I still have a lot to learn, obviously, or at least I hope, I have learnt a thing or two and feel that perhaps it is time to share one of the most important lessons. That lesson is to respect your staff. Work is all about people. People are… well… people. They’re human. The point here being that they are not machines and do not react well to being treated like machines. They do however react well to being treated like people. Sounds like logic? You might not be surprised to hear that I have found this to be not commonly understood or practiced. I have no respect for the computer I am writing this on. None at all. I treat it like a machine. I abuse it, hammer it, and work it relentlessly. I do however have a deep and sincere respect for the people that built this wonderful machine. You see the difference? Respect your staff. Why did you hire them to begin with? Hopefully you hired them because they know their
Read more